LEARN HOW TO DECORATE YOUR HOME ON A BUDGET!

If you love warm, fresh out of the oven cinnamon rolls as much as I do, you’ll love this recipe!   Especially if you don’t have time to make regular cinnamon rolls, which can be a time consuming process.  You can make these cinnamon rolls in under an hour, and they’re delicious!

Many years ago, here in central Illinois, there used to be a wonderful hotel and restaurant called Jumer’s Castle Lodge.  While dining in the restaurant, they would bring a basket full of bread and delicious cinnamon rolls.  The cinnamon rolls are known as Jumer’s rolls in this area.

This recipe is inspired by the Jumer’s restaurant’s cinnamon rolls.  My mom used to make them while we were growing up.  I asked her where she got the recipe, and she thinks that it was in the local newspaper.

I love to make these cinnamon rolls during the holiday season.  Like I said, they’re so quick and easy to make.  They’re a big favorite at holiday meals, and they make great gifts too.

I’ve created a video to show the steps of the recipe, and have also written out a printable version below.

Add yeast mixture to the Bisquick mixture and rest for 10 minutes after mixing.  Divide the dough into 4 sections.  Pat out one section of dough on a floured board to about 12″ x 4″.  Brush dough with butter, and sprinkle on some of the cinnamon sugar mix.  Roll up and cut into 1″ pieces.  Place in a 9″ x 13″ pan.  The rolls can lay close together.   Repeat for the remaining 3 sections of dough.  Pour the remaining butter and cinnamon sugar mixture on top of the rolls in pan.  Let the rolls stand for 10 minutes.  (I like to place the pan on the warming section of my stove top.  It seems to help the rolls rise better.)  Bake for 20 minutes at 350 degrees.

I hope you get a chance to make these quick & easy cinnamon rolls soon, and enjoy them as much as we do! 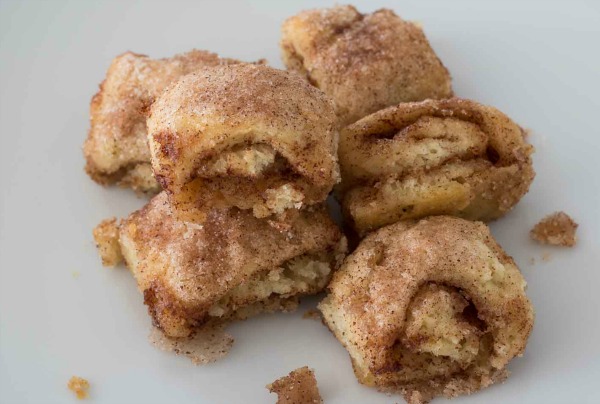 Between Naps On The Porch

Welcome! I'm Jann, and this is where I love to share creative home decor ideas and detailed tutorials to help you decorate your home on a budget. To find out more about me, view my profile here.